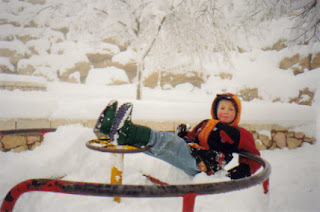 In all of the places I’ve ever lived, winter is winter. Cold, snow, rain, winds that whip right through you. Personally, I prefer the cold and snow to a hot summer sun but even I don’t mind a break from the freezy stuff right about this time of year. In Israel, the best winter escape destination is probably Eilat but that’s a relatively long way from Jerusalem. Our favorite winter get-away was to Ein Gedi. Drive East toward Jordan, hang a right at the Dead Sea and in just over an hour, you’re there.

and jumped right into the cactus garden. After settling into the comfortable cottages, we strolled along the promenade to watch the ibex come out of the rocky hills for their evening meal, the same rocky hills where King David hid from King Saul about three thousand years ago.

The next morning we “monkeyed around”

in the pinat chai (mini-zoo) and tossed a frisbee beneath the beautiful date palms that dot this desert oasis. With the Dead Sea stretched out in front of us and Masada just down the road, there was plenty to see and do.

Arik, the jeep driver who took us to and through Me’orat haKemach (the flour caves) insisted that the brom (bromide) in the air was the special ingredient making us feel so relaxed. Brom or no, we had barely a care on those mid-winter trips down Israel’s east coast.

We’d leave after a couple of days of R&R&R (rest, relaxation and rejuvenation) just in time to be back in Yerushalayim for Tu b’Shevat, the New Year for trees. What a surprise holiday that was for me our first year in Israel. One cloudy winter day, I was walking with a friend and she pointed to a tree that appeared to be covered in light snow. "Look", she said, "ha'shkeydiah porachat!"

("The almond tree is blooming!") Indeed, the tree was blossoming - on the 15th day of Shevat (that year, February 11) just like in the song I had learned as a child. I was delighted to tears.

Later, when my Sefardi neighbor asked me if we had already eaten our Tu b’Shevat seudah (festive meal), I called my friend in a panic. "Tu b’Shevat seudah? We never did that in the States!" “Relax”, she said. (I was glad the brom hadn’t worn off yet.) “Just go get some foods that are made from the seven species of the Land and have a party.” So I bought some barley for a hearty soup, wheat crackers, date spread, olives and a bottle of fine Israeli wine. Pomegranates were not in season and I wasn’t sure how to check figs for bugs so we skipped those. Instead, I threw in some Home-grown almonds and avocados and voila! Seudat Tu b'Shevat!

The Tu b’Shevat seudah is now a family tradition. Instead of the blossoming almond trees, I'll have to settle for the coconut palms of Florida 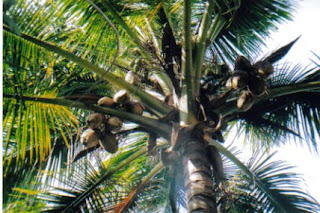 when I visit my mother there for Tu b’Shevat (this year, January 30), p.G. But hey, coconut palms look about the same as date palms to me and maybe they’ve even got pomegranates in Miami this time of year. So as I enjoy my Seudat Tu b'Shevat in the shade of a wide, whatever kind of palm tree, I'll close my eyes, picture a fluffy white shkeydiah and…
Remember Jerusalem.