Had I not promised it in my very first blog post back in November, I would definitely be skipping this month's posting and this topic. But alas, in that inaugural post on the 12th anniversary of our Aliyah (move to Israel), I said that "every day for almost six years we thanked G-d for the innumerable joys, spiritual highs and not unexpected challenges of life b'Artzeynu HaKedosha (in our holy Land). And then - poof! - we were back in Baltimore. But I’ll save that for my end-of-July post, on the anniversary of our return".

It's only July 11 but today, erev Rosh Chodesh Av (the eve of the new month of Av), is the Hebrew anniversary of our return to the States seven years ago. And what better time to ponder that extremely emotional event than as we enter into "the nine days" - from Rosh Chodesh through Tisha b'Av (the fast of the Ninth of Av) - when all of Judaism mourns our nation's exiles from Eretz Yisrael (the Land of Israel) and the destruction of our two Batei Mikdash (holy temples) more than two thousand years ago. So I'm keeping my promise but keeping it brief. And with no photos this time.

Although I've only been blogging for eight months, it was really on that day seven years ago that I was forced to begin to Remember Jerusalem. At first it was painfully easy. Jerusalem was on my mind every waking - and often non-waking - hour of the day. The tears didn't stop for many months. I often wondered if I could be considered clinically depressed but I guess I wasn't showing enough symptoms for anyone to suggest that I be evaluated by a mental health professional.

To quote Rose Kennedy, "It has been said, 'time heals all wounds.' I do not agree. The wounds remain. In time, the mind, protecting its sanity, covers them with scar tissue and the pain lessens. But it is never gone."
Personally, I think time does heal wounds yet I agree with Rose that the pain is never completely gone. Kind of like a broken bone that mends but you still feel the pain when it rains.

So yes, I've come a long way in seven years. But today, metaphorically speaking, is one of those rainy days. (The actual weather forecast here is continued 90-degree temperatures without a cloud in sight...) And you know, that's a good thing. Just as I thank G-d for the years we lived in Israel, just as I thank Him for the blessings that He has showered upon us - family and friends, good health and happy occasions, a caring community and many creature comforts - in the years since we returned to Baltimore, so too I thank Him for the sadness that I still feel about being so far from Home. I don't want to forget. Ever. I don't want time to heal my wound completely. Because here's the flip side: "One who mourns Jerusalem will merit to see her happiness, as the verse (Isaiah 66:10) promises: 'Rejoice with her greatly, all who mourn for her'"—Talmud Taanit 30b. 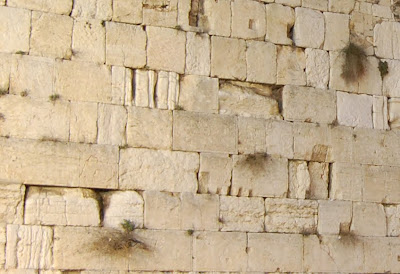 So I'll hold on to my sadness, thank you, and to my longing, and I will wish the same for you. Whether you've lived in Israel or still do, whether you've visited many times or not even once, let's Remember Jerusalem together and, soon - very soon - may we see Yeshayahu's (the prophet Isaiah's) promise kept.