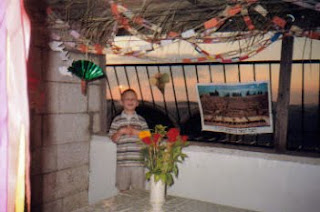 When we brought in three days worth of mail after Shemini Atzeres (more commonly referred to as "the last days of Succos"), the piece that received the most attention was the 17-page full-color brochure from Liberty Mountain Ski Resort. It was only October 2 but my kids practically had their boots on and their equipment waxed. That got me thinking about more than just the sharp drop in temperatures that we experienced over the holiday.

Anyone who speaks ski-language knows that “après-ski” is regarded by some to be as fun as the sport itself. It’s about relaxing after a long, exhilarating day on the slopes, sharing stories of moguls, jumps, weather conditions, etc. and planning tomorrow’s runs. There’s an analogy in there, I think, to the days that follow a nearly month-long High Holiday/Succos season. Although we’re now back to work and school and such, the excitement of the last few weeks lives on in stories shared of shofars blown, succahs built and decorated, endless holiday feasts prepared and consumed – and, yes, even weather conditions. But while après-ski can remedy a lousy day on the slopes, “après-chag” (after the holiday) can only be as good as the chag itself. Thus, the best après-chag has to be one that follows Succos celebrated in Israel.

If you haven’t been there for the holiday, you don’t know what you’re missing. Imagine a Succah (ours) with one full wall “decorated” by the sun setting behind the Jerusalem hills (above photo). We had a succah for eating and one just for sleeping. 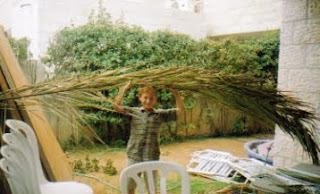 (the roof of the succah) was pruned by the Jerusalem municipality from the date palms in the neighbor-
hood and left on the sidewalks, free for the taking. There are succahs everywhere. At the zoo, at the mall, in the parks… We were even invited - along with the rest of the country - to a photo op with the President and First Lady of Israel in their succah in Jerusalem. Sadly, that former president proceeded to fall out of the good graces of his countrymen and the Jewish nation at large so instead of the photo, here's a copy of the memento we received during our visit:

Loosely translated, it explains that the invitation for every Israeli to visit the President's succah is a symbol and expression of the brotherhood associated with the "aliyah la'regel" - the thrice-yearly visit to Jerusalem that has been a Jewish tradition for about 3,000 years.

A chol hamoed (mid-holiday) trip to Neot Kedumim, the beautiful Biblical Landscape Reserve, is a Succos must-do. The park celebrates the chag with more than 20 succahs of ordinary and unusual shapes, sizes and construction materials, complete with Mishnaic quotes explaining why each succah is or is not kosher.

I can't end this blog post without mentioning my childhood succah - even though it was not in Israel. If any holiday could be called my father's favorite, it would have to be Succos. Daddy, a"h, decorated his succah with love, devotion and great attention to detail. 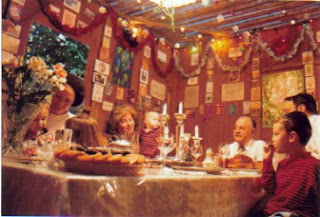 This photo of him in his succah (with my mother, tbl"ch, and some other family members) was featured one year on the front page of the local newspaper. It is surely no coincidence that my brothers said their last kaddish for Daddy on erev (the day before) Succos. I have no doubt that as the holiday began, my father entered his heavenly succah and enjoyed the chag like never before. Today is the hakomas matzeyvah (placing of the stone) at Daddy's kever (grave). His first yahrtzeit (the anniversary of his passing) falls on Shabbos, October 23. Yehi zichro baruch.

Succos is over and the month of MarCheshvan has begun. (Cheshvan is the only month of the year with no Jewish holidays which is one of the reasons it is referred to as "mar" - bitter.) But don't let that get you down. Just Remember Succos in Jerusalem and may your après-chag carry you all the way to Chanukah.