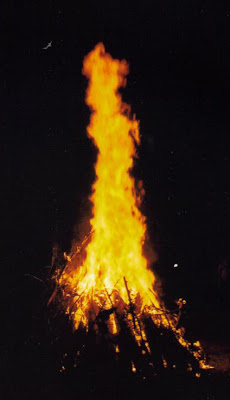 Dateline:
Erev Lag Ba’Omer, the eve of the 33rd day of the 7-week period between the second day of Pesach and the first day of Shavuos. It’s when we count the days from leaving to receiving the Torah; from bringing the barley offering to bringing our first fruits to the Temple when it stood…

On day 33 of the omer, we celebrate the end of the plague that killed the students of Rabi Akiva and we commemorate the yohrtzeit of Rabi Shimon Bar Yochai who brought the mystical light of Kabbalah into the world. You can Google any of these topics and get all the fascinating details of each but I’m going to jump right ahead to the highlight (oh, what a pun!) of the night.

The bonfires, that is. Lit all over the Land on Lag Ba’Omer – by religious and secular alike – they are a sight to behold. There are various explanations for what this is all about but as the stars come out in Israel on the 18th of Iyar (this year, Wednesday night, May 9), no explanations are necessary – nor permits for building a blaze in your yard, on your street corner or in the nearest open field.

There are the HUGE bonfires in Meron, Teveria and other holy places and then there are the medium-sized bonfires constructed with amazing ingenuity by children across the country and lit with adult supervision – usually. Picture everything from tree branches and cardboard boxes to old furniture and mattresses strategically placed for maximum combustion.

The kids work on this for weeks, dragging their “firewood" to the spot they designate as theirs. No one would dare think of stealing a box or wood plank from someone else’s pile of junk.

I never particularly wanted to be among the hundreds of thousands (literally) of people up north in Meron, the burial site of Rabbi Bar Yochai, on Lag Ba’Omer. I was perfectly content in my neighborhood, driving through the streets, walking into the forest, listening to the simultaneously soulful and joyful singing around each medura (bonfire) and to the klezmer band that traverses the hills of Har Nof on the back of a flatbed truck...(wish I had a photo of that to share).

For our very first Lag Ba’Omer in , my boys were not yet “Israeli” enough to compete with the local bonfire builders so they created their own version: a Medura America’i, they called it – an “American Bonfire” - made of toothpicks and matches. 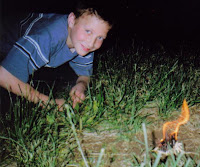 It was quite a hit among their Israeli friends and it quickly became a family tradition of sorts. We’ve continued to build our Medura America'i each year here in . For my kids, it brings back fond memories. For me, it has taken on an almost mystical significance of its own.

As I gaze upon our tiny Medura America’i, I Remember Lag Ba’Omer in ; I am transported mentally, emotionally and spiritually back to where the bonfires burn their brightest. As I stare into the tiny flame, I do not have to wish I was there...I am there. I am leaving , I am standing at , I am bringing fruits to the Beit HaMikdash, I am studying the Torah of Rabi Akiva and the Zohar of Rabi Shimon Bar Yochai… 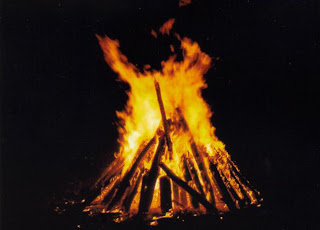 ...and I’m there together with all Am Yisrael,
one Great Ball of Fire unto the nations.
Lag Sameyach!