Today, erev Rosh Chodesh Av (the eve of the first day of the month of Av) is the ninth Hebrew anniversary of our return to the States after living in Israel for almost six years. It is also the eve of the beginning of the saddest period on the Jewish calendar, "The Nine Days", which culminate with the fast of  Tisha b'Av, the ninth day of Av, when each of the Batei Mikdash (holy Temples in Jerusalem) were destroyed (approximately 500 years apart).

My thoughts and emotions get kind of muddled each year on this day and during the nine days ahead. I become a jumble of personal sorrow (on leaving Israel) and national loss (of the Jewish nation's closest possible relationship with G-d via the holy Temples). My personal yearning to return gets all mixed up with our national yearning for the ultimate redemption and ingathering of the exiles. Rather than try to un-muddle my mind for this post, I chose to let others speak for me - and far more eloquently than I would.

But first this newsflash: Israel's Civil Service Commissioner, Moshe Dayan, recently announced that Tisha b'Av will be included on the list of authorized holidays (that is, days off from work) in Israel beginning this year. This short news item made me smile. Not because Israelis can now fast and mourn in the comfort of their homes. Rather, because our sages tell us that in the times of Mashiach (the Messiah), when certain holidays will be abolished, Tisha b'Av will remain on the calendar but as a day of joy and celebration. I am delighted to see that the State is already making arrangements for Tisha b'Av to be a holiday! Now all we have to do is yearn for it...

Just as the topic for this post was beginning to gel,

I discovered this book on my mother's bookshelf. I know nothing about the author nor can I vouch for the veracity of his selections but these words from the book jacket cannot be denied: "Yearning has always been a major component of Judaism. This yearning can take many forms, and is attached most often to the Holy Land, that wonderful place...where spirit and G-d play a central role in everyday life."
In the book, this vignette about Rabbi Nachman of Breslov (circa 1800) rings true:

Once Rabbi Nachman of Breslov sat speaking about Eretz Yisrael (the land of Israel), of its holiness and its beauty, with two of his children's fathers-in-law, Rabbi Aryeh Valutshisk and Rabbi Avraham Dov of Chmelnik. In the midst of their conversation, the rabbi of Valutshisk exclaimed: "For the past forty years I have longed for Eretz Yisrael, desiring so very stongly to bask in its glory, and yet I have not been privileged to go there and see it." The rabbi of Chmelnik was astounded at this comment. "Why should anyone pine for so long? All one has to do is take one's money and travel there!" Rabbi Nachman said to his disciples: "The rabbi of Valutshisk will eventually move to Eretz Yisrael, while the rabbi of Chmelnik will never see the country - for longing and pining are more important that all the world's treasures..." A short time later Rabbi Nachman's words were fulfilled.

For a more modern-day version of this notion of "yearning", let me introduce you to Rabbi Pinchas Winston, a prolific writer on the subject of geulah (redemption). The very first chapter of his book "Geulah B'Rachamim - Sixty Daily Lessons to help a Jew Yearn for Redemption"  is entitled "Learn to Yearn". He ends the chapter with this: "Remember...redemption can occur without making a single change in location or lifestyle. It just takes a change of heart." So even if you're not quite ready to pack your bags and make Aliyah, you are still a crucial part of the process. (Of course, if you do have the ability, there's no place like Home to wait out the rest of the exile - may it be brief!!) The book is excellent. You can order it and his other works here.

If you don't have the time or patience to read, at least watch this short video that Rabbi Winston recently produced. Its powerful message - that "you have to want it with everything you have" - is what yearning's all about. And the "auto-tune remix" (I learned the lingo from my teenage son) is so cool!

this Tisha b'Av (observed this year on Sunday, July 29), you can join thousands of Jews in over 300 locations who will be watching Project Inspire's annual Tisha B'Av production. Billed "Journey to Jerusalem", the newspaper ad reads: "On Tisha b'Av, we yearn for the reubuilding of the Bais HaMikdash and our return to Yerushalayim (Jerualem). This year, invest one hour of your Tisha b'Av and be truly inspired to help bring the Geulah Sh'leymah (the complete redemption)." To find out where this film is being shown in your area or to arrange for it to be shown in your area, call 646-461-3339 or email info@projectinspire.com.

"Yearning", by the way, does not only apply to those of us in chu"l (chutz la'Aretz - outside the Land). Quite the contrary! Any thinking Jew living in Israel - whether born there or immigrated - knows that until the Temple is rebuilt and the Shechinah (G-d's presence) is completely returned to Zion, he, too, is still living in exile - albeit as close to G-d as one can be in the meanwhile. Yet, surrounded by all that holiness and history, one can lose sight of what is still so sorely lacking. Sometimes it's the "chutznik" (person living outside the Land) who needs to remind his Israeli counterpart that there is still much more to yearn for.

Since our return to the States, I have carried this in my wallet:

I have yet to find its source. (If you happen to know, please share!) Allow me to translate:
The story is told of a man who wanted to leave Jerusalem for chutz la'Aretz. The sages said to him: "Was it not decreed that one should not even leave the city of Jerusalem? How much more so if it is in order to leave the country entirely!". The man replied: "I am envious of those who live outside the Land because they yearn for Jerusalem. I have never tasted these yearnings. I want to leave so that I can experience these longings for Jerusalem." They permitted him to leave on the condition that while in chutz la'Aretz he would speak the praises of Jerusalem.

Which brings us back to my muddled mind; to the reason for my blog in general and this post in particular. To Remember Jerusalem is to yearn for her and for G-d's revealed presence among us. If I can't physically be there right now, as least I can sing her praises and perhaps help others learn to yearn for our third and eternal Bais HaMikdash, may it be built speedily and in our day. 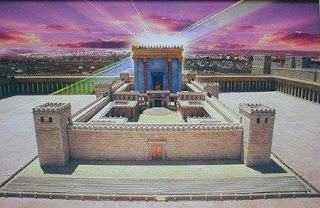 Nice picture, isn't it? Don't know the source of that, either. But the image at the beginning of this post - "Skyline of Jerusalem" - is a micrograph of the entire text of Tehillim (Psalms) by Menachem Boas.

P.S. As I go to press, we mourn yesterday's passing of HaRav Elyashiv, zt"l, the Gadol Hador (spiritual leader of our generation). May his holy neshama (soul) be a meilitz yosher (heavenly advocate) for all Am Yisrael. At the same time, our hearts go out in condolence to the families of the Israelis killed in a terrorist attack in Bulgaria. May the Almighty heal the injured and end all our individual and national suffering.