I've been blogging in my head for three months now trying to pick the right topic, find the right words and choose the right photos for my next post. This morning, in about three minutes, I had it all in this one poignant video. My last blogpost was about unity. It got some heat and led to some very meaningful conversations between myself and friends on both sides of the Sea. Each exchange ended with the shared hope and prayer that we should experience true unity under peaceful circumstances before we are forced into it by outside circumstances.

Alas, we've been forced once again with the kidnapping by Palestinian terrorists of three young, innocent teenage boys. The miracle of technology has enabled me to receive notices about prayer gatherings both locally and halfway around the world. I will continue to participate in them and to include Eyal, Gilad and Naftali in all my personal prayers as well until they are home, safe and sound.

My earliest memories of praying for "strangers" is probably the metal bracelets we wore in high school with names of Soviet refuseniks. Anatoly (Natan) Sharansky, Yosef Mendelevich...their names became household words; prayers for their release from Soviet prisons were said daily. There were rallies and letter writing campaigns on their behalf. Too many more names have become household words since then.

When I Remember Jerusalem, I don't want to have to remember the names of these three young men. I don't want their names to become household words. I want them to become "strangers" to me again. Just three ordinary teenagers waking up each day, going off to yeshiva, having fun with their friends, coming home to their families.... But until they do, I will think of them as my boys and pray for their well being as I would for my own sons. 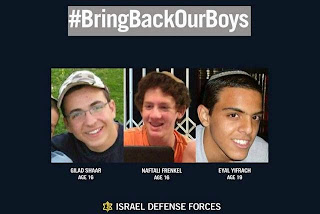 Please join me in praying for Gilad Michael ben Bat Galim, Yaakov Naftali ben Rachel Devorah and Eyal ben Iris Teshura. Psalms 121, 130 and 142 are good for starters. Let me know if you want a longer list.

"Acheinu kol bais Yisrael.... - Our brothers, the entire House of Israel, who are in trouble....May Hashem have mercy on them and bring them out of...captivity to redemption...right now, swiftly, soon...Amen".