The Vision and The View - A Short Story

Once upon a time, there lived a young couple, blessed with several young children, in the Jewish Quarter of the Old City of Jerusalem. They were there on a mission: to welcome Jewish young adult tourists to the holy City; to provide them an inexpensive place to stay while they learned about their Judaism and experienced it "hands on".

They were successful to the point where they needed more room to accommodate more students so they decided to move out of the "dorm mother's apartment" in the hostel where they had been living. Now they just needed to find another home for themselves...

The couple was not asking for much. A roof over their heads with enough room for their kids and their basic necessities. Funds were limited. But if the real estate motto "location location location" rings true, it rings loudest in the Jewish Quarter of the Old City of Jerusalem. Available apartments are few and far between. Rental prices are high - and for good reason. The "Rova" (as it is called in Hebrew) is, after all, the center of the universe!

The Jewish Quarter is not very large and word of mouth travels quickly. Friends and neighbors were on the lookout. Rental agents were doing their best but nothing suitable could be found. The search continued until one agent finally said: "There is only one other apartment that I know of..."

They went to see the apartment and it was everything they needed - and then some. There was even a small room with a separate entrance that they could use as an office for their outreach efforts. And the price was right. They said "We'll take it!" to which the real estate agent replied "Wait! You haven't seen the view from the porch". The young couple weren't particularly interested in the view. The apartment would be perfect for their work and provide enough room for their family and that was all that mattered. But the agent wouldn't take no for an answer. "You must come see the view." He walked them across the living room/dining room area and directed them toward the glass doors leading to the porch. And this is what they saw: 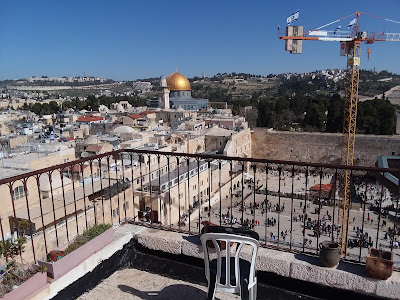 They could hardly believe their eyes. This was one of the Rova's most incredible views of the Temple Mount, the Western Wall and a panorama extending many miles in several directions. To rent an apartment with such an amazing view should cost a small fortune but the owners were asking a fraction of what they could get. There had to be a catch. And indeed there was.

When they asked their rental agent, he explained that the elderly owners had moved away two years earlier and many potential renters had since been brought to see the apartment. "But the owners insist on meeting anyone who expresses interest...and in the end they say they're not renting it out. Perhaps they're a bit senile. Or just difficult. This has been a great source of frustration for rental agents which is why I was reluctant to show you the apartment. I knew you would like it and I didn't want you to be disappointed. That said, if you're still interested - and you can handle rejection, I will contact the owners."

The young couple had nothing to lose. A meeting with the owners was arranged. The elderly woman spoke on behalf of herself and her husband who sat at her side. She asked the young couple to tell their story. They shared their vision and told the elderly couple why they needed a new place to live. They spoke with sincerity and excitement about the many young Jews they had met and taught and brought closer to their Judaism - and of their dream to do more. When they were done, the old woman glanced at her husband. Without a word uttered between them, the woman turned back to the young couple, smiled and said "Chikinu lachem" - We have waited for you.

She went on to explain that for many decades, her husband had been the Rosh Yeshiva (dean and spiritual leader) of a yeshiva in the Rova for young men of sephardic descent. He taught Torah to hundreds of students and guided them to live meaningful Jewish lives. Although age and infirmity had taken their toll and the couple could no longer continue their holy work or climb the narrow stairway to their apartment, they were only willing to rent it to someone who shared their passion for teaching Torah and bringing Jews closer to their heritage.

All the potential renters they had met until now had wanted the apartment for their own pleasure, including the view from the porch. The owners were prepared to wait for someone who would use the apartment to continue their life work in their own unique way. They had finally met who they were waiting for.

Papers were signed and the deal was sealed. The young couple left the meeting overwhelmed with gratitude to the Almighty for this extraordinary gift. They wondered how they could possibly thank Hashem for His kindness and generosity. And then they knew... The only way to say Thank You would be to share this gift with others.

Their home, their porch and their view are now open to all. Schools bring their students on class trips, young men bring their dates there to propose and I merited visiting them one glorious Shabbat afternoon last January when I heard their story from the lovely lady of the house. (I went back later in the week to take these photos.)

The young couple in the story are Matan and Chaya Weisberg 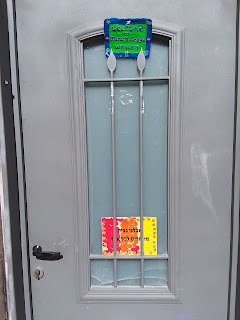 directors of the Heritage House which was originally founded by Rabbi Meir Schuster, obm. To read more about who they are, what they do, and to support their work click here. And tell them I sent you to arrange a visit to their porch.

This Sunday, August 11, we will observe "Tisha b'Av" commemorating the saddest day on the Jewish calendar when both our holy Temples were destroyed. When I Remember Jerusalem, I imagine, with hope and a prayer, that the view from the Weisbergs' porch will soon be that of our third and eternal Beit HaMikdash, even more open and inviting than the Weisberg home. Amen.