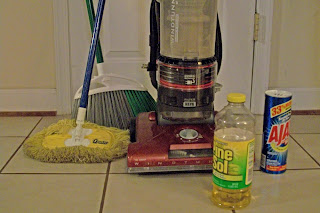 The mop, broom, rags and my brand new Hoover Windtunnel vacuum sit idly by as I try to find every possible way to avoid the inevitable Pesach preparations. Not that it’s really all that daunting anymore. The kids are no longer conspiring (or so it always seemed) to run around the house depositing cracker crumbs in every corner. Now, the boys clean the cars and the girl does much of the cooking. Bill covers the counters, kashers the sinks and scours the oven. Yet somehow it always feels like they're calmly doing their designated jobs while I’m consumed by the responsibility of overseeing the entire operation - sort of like the CEO of a major corporation. Thus, the procrastination.

So let’s see what I’ve accomplished in the last two weeks. I’ve put together a family tree of my maternal grandmother’s illustrious Chassidic lineage and I shopped for the anniversary gift that my mother-in-law had asked us to get for ourselves way back in January. I started a new part-time job that I’ve been threatening to quit since day one - but I think I’m going to hang tough and learn to love it. On Sunday, I baked a small batch of challah - yes, challah. Hey, there are still two more Shabbatot until Pesach! And, most procrastinatory (?) of all is, of course, this blogpost.

When I sit down to relax after a long, hard day of procrastination, I close my eyes and let my mind wander back to the Pesachs that we celebrated in Israel. Almost every year, my parents came for the chag (holiday) – and we, the Israelis who were obligated to have only one Seder, photographed and videoed them

and the American yeshiva guys and seminary girls who were so grateful to have a place to go for their second Seder. When it was finally Chol Hamoed (the intermediate days of the holiday) for all of us, we joined the rest of the country on various tiyulim (trips and hikes) all over the Land.

Westward Ho! to the sand dunes of Ashdod. Eastward to Ein Bokeq - or is it Boqek? Bocake?!? That all depends on which sign you happen to see along the way. (See atimeofthesigns.blogpost.com - a very fun blog that I would provide the link for if I could quickly figure out how.)

We went South to see Machtesh Ramon (the Ramon Crater); in the North we found 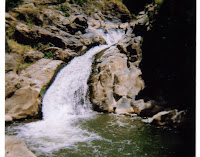 the rushing post-rainy-season waters of Tel Dan. Everywhere we went, we were together with the “hamone am”, the multitudes of Jews all celebrating our Holi-day in our Holy Land. Men in shtreimels, hats, kippot (“yarmulkas”), baseball caps and bare-headed; women in skirts or jeans, head scarves or wigs (or bare-headed!), all speaking in languages as familiar as Hebrew and English and as foreign as Farsi, forming mincha minyanim (afternoon prayer gatherings) in every park and parking lot as the sun began to set on another fun day spent with family, friends and our countless sisters and brothers posing as perfect strangers. On Chol Hamoed trips, we never left home without our trusty mangal, that portable

mini-grill for roasting shishliks (known here as shishkebobs), onions and naknikiot (hotdogs).
As with all good fun, it was over before we knew it and we were back to the regular routines of school, work, and errands. But the photos and the memories tell the sequel to the story of the Exodus from Egypt; of our journey Home and our 3,500 year old hope for the ultimate redemption.

Ok, it's Rosh Chodesh Nisan (the first day of the new month of Nisan). Procrastination time is over...let the preparations begin! Whether you will be sitting down to one Seder or two, we’ll all be ending the evening with the very same song: “L’shanah Ha’Ba’ah b’Yerushalayim.” Next year, please G-d, may we no longer have to "Remember" Jerusalem but merit to rejoice in her rebuilding and delight in our eternal place therein…

As my Israeli kindergartener used to sing: "Simcha Rabba, Simcha Rabba, Aviv Hee'gee'ah, Pesach bah"! It loses something in the (loose) translation but basically, "Hooray, hooray, let's give a cheer! Spring's arrived and Pesach's here"! Warmest wishes for a Chodesh Tov u'Mevorach (a blessed new month) and a sweet, happy Pesach to one and all.