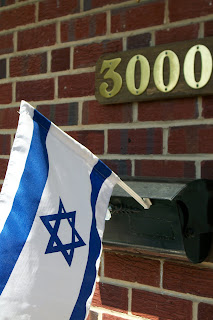 Let’s face it. For American adults who make aliyah, once an immigrant, always an immigrant. Oh, sure, they’ll acclimate to their new surroundings and culture to one extent or another and they’ll usually find a comfortable social niche for themselves. But at the end of the day there will always be some gap between the born-there and the born-again Israeli. This is probably true of most adult immigrants from any country to any country - like my grandmother, may she rest in peace, who came to the U.S. from Poland when she was in her twenties but never lost her accent. Even as she raised a modern American family, she held on to many of her Eastern European ways for all her 84 years.

In my humble opinion, this is not a bad thing. Because whenever an immigrant does something that might seem inappropriate to his native neighbor, he can blame it on his original nationality. This little trick served us well when we lived in a predominantly Israeli chareidi (“black hat”, for lack of a better definition) neighborhood where Yom Ha’Atzmaut (Israel Independence Day) was not exactly the most celebrated date on the calendar.

Of course, everyone showed up at the edge of town at night to watch the fantastic fireworks display that took place high above a nearby hill. But that was about it. I’m entirely unqualified to venture into a right/wrong/Hallel? (with a bracha or without?)/ discussion on the matter. And I'm making no attempt at political correctness so please forgive me if you find any of this offensive. Suffice it to say that we picked our neighborhood for its chareidi demographics (both American and Israeli - the differences go beyond the scope of this blog) but there were times when we had to decide whether or not to put our personal brand of nationalism first. Yom Ha’Atzmaut was a no-brainer.

We gave our kids a day off from school (yes, our boys’ schools had classes on Yom Ha’Atzmaut),

put the flag on our car and were off to celebrate – whether in the city center or at a grassy park or at the home of a like-minded American in another neighborhood. I wanted my children to appreciate the day, with all its debated significance, and to know that if not for the State and the benefits it offered to olim chadashim (new immigrants), we would not have been living daily life in our holy Land.

Our very first Yom Ha’Atzmaut in Israel included a visit to the home of the quintessential religious Zionist, our cousin Clara – known to many as The Chicken Lady of Jerusalem. 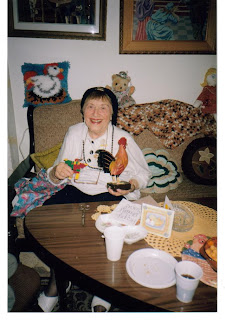 (I’m still too technologically challenged to include the appropriate links in this blog but just Google “the chicken lady of Jerusalem” and you’ll have all the links you need.) Cousin Clara passed away this year on March 26 – less than two months shy of her 100th birthday. For almost a century she lived and breathed “Israel” – from places as distant as Russia, New York and Los Angeles and, at long last, in the small apartment she and her husband merited to own in Jerusalem where she lived to see numerous great, great granchildren being raised in her beloved Land. The incredible stories she told and the patriotic songs she sang were a first-person account of Israel’s pre- and post-Independence struggles and triumphs. That visit with Cousin Clara had to be the most meaningful of all our Yom Ha’Atzmaut excursions and we will cherish the photos and videos forever. I dedicate this blogpost to the memory of Dr. Clara Hammer, a”h. (She received her honorary doctorate from Yeshiva University in 2008). Surely, her indomitable spirit is now storming the heavens, demanding Israel’s safety, security and success. May the Almighty respond with revealed good and sweetness.

Back here in chu”l (“chutz la’Aretz” – that is, outside the land of Israel), the flag that we used to put on our car now adorns the “Welcome” wall hanging in the entrance hall of our home. But once a year, it goes out for an airing. On Yom Ha’Atzmaut, it flies from our mailbox, proclaiming to all passersby that we thank the Almighty for granting Israel her Statehood as we pray that He continue to bless her inhabitants with both spiritual and material growth and accomplishment.

Fireworks, flags, friends and Cousin Clara. Just some of what comes to mind when I Remember Yom Ha’Atzmaut in Jerusalem. Happy 62nd Birthday, Israel – and Chag Sameyach to everyone celebrating along with us.