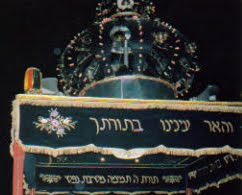 When the kids saw the title "Tora! Tora! Tora!" on the video we’d brought home (about the Japanese attack on Pearl Harbor) they were initially disappointed. They’d been promised an action film but assumed that “Tora” was a shorter transliteration of “Torah” and that the film would be…well, not quite their idea of a fun Saturday night activity. We convinced them to watch the first few minutes of the movie and of course they got the action they wanted.

When we lived in Israel,

the kids knew that the essence of the place really was Torah! Torah! Torah! and there was no disappointment in that. Just days after we’d settled in to our apartment in Jerusalem, we stood on the porch, five stories above a procession accompanying a Torah scroll on its delivery to the shul across the street. We watched the parade in wonder and excitement. The crowd went as far as the eye could see down the winding street that was closed to traffic. We would soon learn that this was a pretty regular occurrence throughout Jerusalem and all over the country. At a Hachnasat Sefer Torah (welcoming a new Torah) children carefully carry torches alongside a slow-moving truck adorned with a huge, brightly lit crown; its sound system blasting joyful Jewish music into the starry night. The dancing with the Torah continues into the beit knesset (synagogue) where a festive dinner is served to members of the congregation.

In the years ahead, we also discovered that 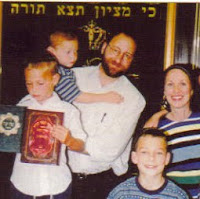 the best school events are the Torah-related ones. Like when first-graders receive their first volume of Chumash (the Pentateuch) or when the older ones started studying Gemara (Talmud). Of course, these special events are celebrated in chu”l (outside the Land) as well but our sages tell us that “Ein Torah k’Torat Eretz Yisrael” - there is no Torah like the Torah studied in the Land of Israel. Indeed, there always seemed to be a unique spirit that went along with these celebrations in Israel in general and in Jerusalem in particular.

was a variation on this theme. Our son belonged to Tora Dojo. Tora in Japanese means tiger (thus the title of the aforementioned film) which works well for a karate club whose members are all Torah observant. In fact, Tora Dojo was started in New York but, like everything else Jewish, it takes on a whole new dimension when practiced on holy soil. (Heh, heh - I've finally inserted a link! It only took six months and the help of my husband, my hero.)

why all this talk about Torah? Because Shavuos is upon us (Tuesday night through Thursday evening). As we prepare to accept the Torah anew and celebrate the occasion for the 3,322nd time, I can’t help but Remember Jerusalem. “Ki m’Tzion teytzey Torah u’dvar Hashem m’Yerushalayim” – from Zion shall come forth the Torah, and the word of G-d from Jerusalem (Michah 4:2). We have yet to see it in all its glory (may that happen speedily and in our time) but even in the meanwhile, to experience Torah! Torah! Torah! at its best, there’s no place like Home.
Chag Sameyach!