With the official start of spring just two weeks away, we're finally getting some winter! As I type, we're in the middle of what was promised to be our one (and likely only) major storm of the season with 5-10 inches of heavy wet snow and strong winds predicted - although it's looking pretty wimpy at the moment with just a drizzle falling and nothing sticking to the streets. But we weren't going to wait for what might yet be another snowless winter in Baltimore. Instead, on an almost springlike day in January, we loaded up the van and traveled north to "visit winter", as one of my boys put it. We did some skiing and snowboarding 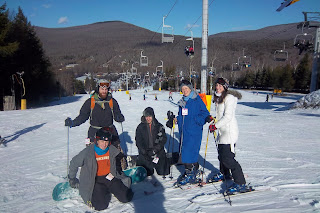 on Hunter Mountain (yes, even I - for the first time in 24 years) and all in all had a great get-away. (Hey, why isn't "Blogger" letting me choose the size and positioning of my photos like it used to? Anybody know? Oh well...) Hunter Mountain isn't Har Chermon (Mount Hermon), Israel's highest peak and only ski slope, but we could make believe - especially knowing that Berel

our family representative in the holy Land, had just skied on the Chermon a few days earlier following Israel's biggest snowstorm in two decades. You've probably already seen photos of that winter wonderland and the blessed snowmelt that is now filling Lake Kinneret so I'll skip that here.

One of the highlights of that trip to Tannersville, New York was the getting there. About four hours into our journey, just when we were starting to feel a bit squirmy in our seats - and still with two hours of travel ahead - we put on some Udi Davidi
and began to jam. Yoel on the bongos, Simcha's tin whistle, my mini-tamborine... What a wonderful way to pass the time. And I couldn't help but recall that our family's musical moments began in earnest when we lived in Israel. Flute lessons for Shani under the tutelage of her South African teacher, Oriella, prepared her to perform at her Bat Mitzvah, our first family milestone celebration in the holy Land. Simcha took up the trumpet sometime thereafter with his wonderful Russian instructor, Georgi. Back here in the States, Berel and Zevy have most recently settled on guitar. (And Bill is a great audience!) The "Sheves Achim" band played just one gig - at Berel's bar mitzvah. But our 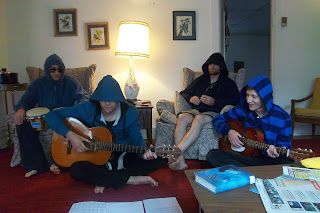 family jam sessions have become a favorite feature of our summer and winter vacations.

A recent email from Berel made me feel like our humble Har Nof musical beginnings had come full circle: "Last night my friend asked me if I wanted to go with him to the hospital today to play music for the sick. I was somewhat reluctant at first but I quickly consented. What was supposed to be a quick in and out half hour became over two. The main thing that spurred us on was a feeling, an amazing feeling that was inspired by what we witnessed in the hospital beds before us. I have never felt anything like the feeling I got when our music made unaffiliated Jews break down in tears - whether it was the sick people or their healthy family members. Our music made people who couldn’t speak wave their hands around and clap because that was the only way they could join in. Every smile we got, whether from an old (113 years old, the oldest man in Israel) and sick person or a young and healthy person made this feeling grow stronger and stronger. My friends and I are gonna try to do this more often and even try to get larger groups to go so that we can entertain more of the hospital at once." Go, Ber! We're looking forward to having you back here for Pesach (Passover) to jam with the fam.

Next week we will celebrate Rosh Chodesh Nisan (the beginning of the month of Nisan), the month in which Pesach falls and spring begins. Rosh Chodesh Nisan is also the day on which the Mishkan (Tabernacle - forerunner of the holy Temple) was dedicated as the first earthly place where G-d's Divine Presence would dwell among His nation. In the Musaf prayers for Rosh Chodesh, we ask that we may once again rejoice "...in the service of the Temple...and in the songs of Your servant David that are heard in Your city...". That beautiful prayer makes me Remember Jerusalem and the sound of music that is an essential part of her past and present. King Solomon's Song of Songs, which we will read during the holiday, will conjure up images of the Temple's majesty in his day. Indeed, the music of the Levites 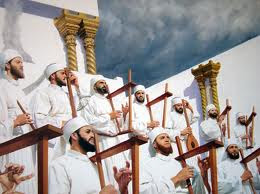 in the Beit HaMikdash was one of the highlights of the Temple service. I've often day-dreamed about what that must have sounded like... May we merit to hear it soon - perhaps even this Pesach in our third and eternal Temple. There's still time!

Meanwhile, I will take this opportunity to wish you and yours a blessed month of Nisan and a joyous Pesach - full of the sweetest songs of winter past and spring ahead.